The practice of motion design is, as its title suggests, a thing that is constantly changing and evolving, adapting to the world (and the technology) around it. But in order to grow and change in a way that keeps pace with the times, often motion designers have to look outside the traditional aesthetics of advertising and production spaces to different design-related fields that can offer inspiration and unique perspectives — and one of the most fascinating (and underrated) of these is architecture.

I can personally attest to the influence architecture has had on my own work. That’s not to say that I was always aware of its potential for inspiration — in fact, you could say that I didn’t realize my passion for architecture, or art for that matter, until somewhat late in life. Growing up in Mumbai, my parents wanted me to become a doctor or an engineer. They even tried to get the best of both worlds by introducing me to a course in biomedical engineering. But I always found myself wanting to do something else.

So, after I graduated high school, I accompanied a close friend to take the architectural entrance exam for the Kamla Raheja Vidyanidhi Institute for Architecture (KRVIA), thinking, “Well, why not?” To my surprise, I actually did very well, and more importantly, I enjoyed the exam! So I decided to give it a try. But it wasn’t until after starting my undergraduate career that I truly fell in love with architecture and art in general.

From there, I pursued an M.F.A. in Computer Art at The Savannah College of Art and Design, where I was able to take my experiences in form and space to create narratives that felt close to me. In my final thesis, “The Role of Architecture in Filmmaking,” I explored the history of film in relation to scale, light, and form, the classical base elements of any piece of architecture.

When I came to New York, I began applying these ideas across the work I was doing, from an MTV reality show to various freelancing gigs at post-production/animation studios around the city. I also began to see the places my contemporaries were drawing influence from, but not many of them really seemed to turn to architecture as a source of inspiration.

On the surface, it may seem like there aren’t many similarities between the two. But in my opinion, the foundation of any and all forms of design are essentially the same, be it architecture, product design, graphic design, motion design, or any related field. As the saying goes: “form follows function.” This idea can be applied universally to any form of design. As designers, we are problem solvers, and our goal is to come up with a solution that not only solves the problem but connects on a more personal level with the users or audience. Great architecture is an easy example of this: it not only solves the problem but makes the experience of visiting or seeing a space enjoyable in the most unexpected way.

If you’re willing to look, the world of architecture is full of beautiful and enduring creativity. I am personally a big fan of both Zaha Hadid and Mies Van Der Rohe, and they remain some of my biggest creative inspirations. They have very contradictory styles — Zaha Hadid with an emphasis on incorporating curves and creating organic shapes on an institutional scale and Mies Van Der Rohe focusing more on the space and light created in his buildings –, yet they both infuse a distinct sense of personality in their work. For me, what truly sets them apart is their individuality and non-conformist attitudes.

In my own studio, I’ve also been influenced by architecture in that I am a firm believer in nailing a concept down first before going into production. For instance, rather than using CGI for the “Skyline” spot we created for IKEA, we built a set with real furniture and shot it with a motion-controlled camera. It ended up being the much better choice for the final product, as it celebrated the iconic New York City skyline in a way that CGI could not. This is just one of many examples of the ingenuity we all must employ to create our work. In this regard, we are very technique-agnostic, and that is something that can work wonders for your creativity if you are willing to think outside the box.

It is also possible for architects to be influenced by other VFX-infused mediums as well. I’m starting to see evidence all around of architecture that is influenced by many of today’s popular science fiction and futuristic film franchises, as well as how those spaces work with a human scale. From the visionary sets of Blade Runner 2049, Star Wars, or Black Panther to the influence of films like Her and Ex Machina, architects are getting a chance to look at fantasy worlds that don’t exist and bring bits and pieces of them back to our own world for inspiration.

For those who wish to draw inspiration from nontraditional sources, the best advice I can give is to keep your eyes and ears open to the world around you. Whether it’s from reading or listening to a podcast on a certain subject or simply observing your surroundings, learning about disciplines outside your own can expand your thought process greatly. Looking to other art forms, specifically architecture, has made me a better director and motion designer. From the use of color on a toothbrush to how light hits certain objects in different environments to create interesting shapes, I am always finding little details that I can translate into our work. At the end of the day, this is a craft like any other, and the more you learn from the work of the artists who came before you, the better you will become. 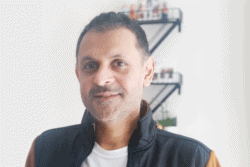 Vikkal Parikh is the award-winning creative director at Ataboy. Born and raised in Mumbai, Vikkal trained as an architect before coming to the U.S. to get his MFA in computer art from Savannah College of Art and Design. Starting out as an art director for MTV, Vikkal then freelanced as a designer/animator in New York before joining Red Car in 2006.

In his free time, you can find Vikkal playing for the Hoboken Cricket Club.