This is the first in a series of video essays tentatively entitled Render Break. Thanks for checking it out!

The post quickly racked up over 100 comments that touched on topics including curation, community development, diversity and business practices. It was great to see such an impassioned discussion on Motionographer.

As editor, I should own up to a mistake I made. I entitled the post “11 of the best showreels from 2015.” That was not wise. Maybe I should have used “Peter Quinn’s 2015 reel roundup” or “11 reels that are really good according to one person.”

But I mistakenly assumed that these titles were either self-evident or covered by my introduction to the article.

That mistake aside, I did want to address a couple of the reader comments made on Peter’s post. The sentiment behind these comments has popped up from time to time over the 10 years of Motionographer’s history.

Theres definitely a place out there [for] the styles in these reels, but those styles are too overrepresented by the industry, by schools, and by blogs like Motionographer, we need to get some fresh air in this here game.

And another anonymous user (“ConcernedAnimator”) wrote:

Yes, nobody but we ourselves should be the ones to blame for breaking or not the norm within our own works, but as the go-to place for motion graphics, Motionographer should be always trying to push things further.

The implication of these comments is that Motionographer is only sharing a narrow selection of work and just reinforcing the “status quo” — whatever that might be.

These comments are a perfect opportunity to discuss a fascinating quirk of human perception called “confirmation bias.” But before we talk about that, I need to do address the comments themselves first.

A quick look at some numbers

Okay, let’s do a quick inventory. Don’t worry, this will be more fun than it sounds.

Here are the 10 most visited pages on Motionographer since the Inspiration page was launched in April of 2015: 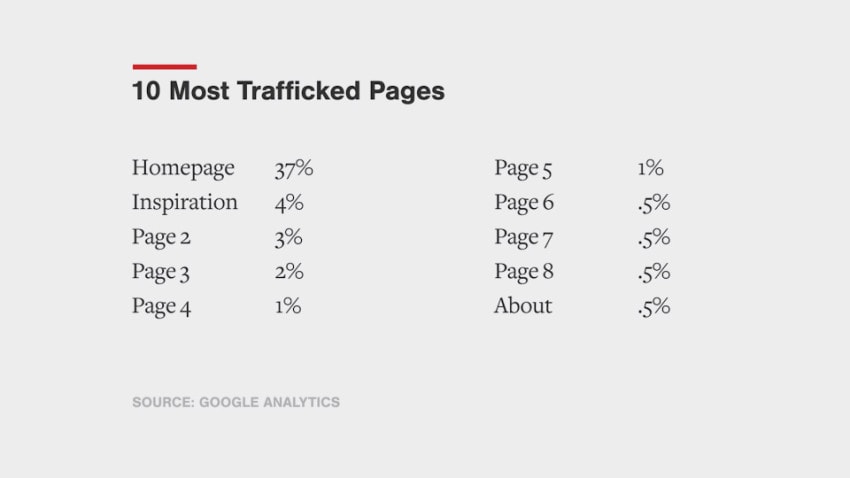 There’s only 1 page in the top 10 that isn’t a variation on the homepage or the Inspiration page. (Hint: it’s the last one in the list). In other words, most people experience Motionographer as a grid-like listing of a bunch of projects and articles.

Let’s break down the homepage in terms of styles represented or topics covered:

Motionographer’s Inspiration page is updated every day — sometimes multiple times a day. More than any other page on the site, it represents what we’re currently watching (and liking). So let’s break that down, too: 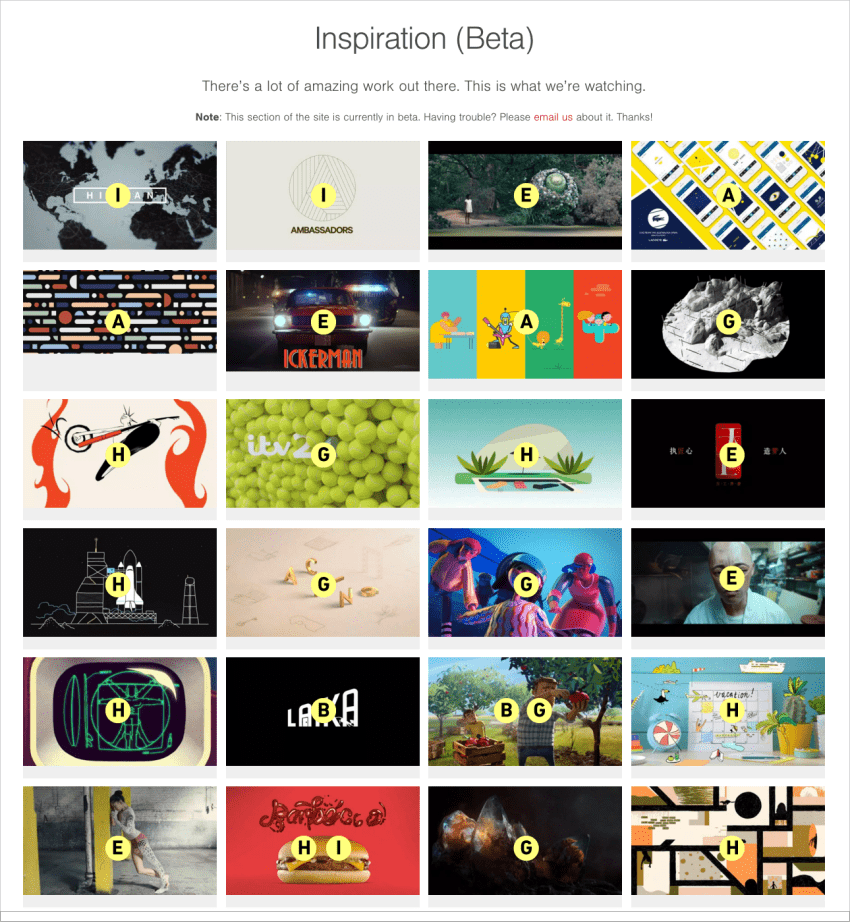 We could keep going and do a breakdown for all of our top trafficked pages, but we’ll stop here.

Side note: The traffic is actually irrelevant. If Motionographer is being criticized for what we share, then we should be measured by what’s on the site, regardless of how many times a page is visited. Still, traffic feels like a decent way to filter things.

Taking the homepage and Inspiration page together, here’s a rough breakdown: 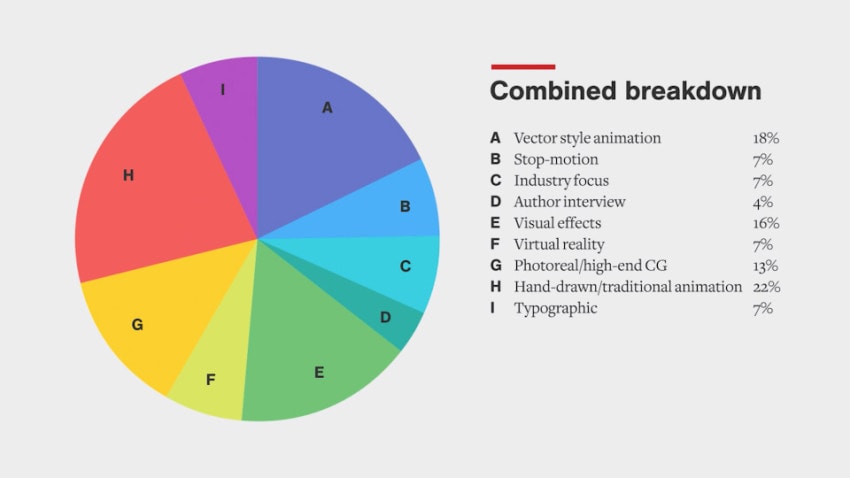 There’s weird, abstract CG stuff right next to hand-drawn animation right next to live action-based VFX work. We even include some coverage of emerging tech, like virtual reality and real-time graphics.

So what’s going on, then?

Where are some people getting this idea that Motionographer is somehow not posting a variety of work — an idea, by the way, that we just established is not based in reality?

Okay, enter “confirmation bias.” (Well, not “enter,” since I mentioned it at the beginning of this whole thing, and it’s been sitting patiently in the corner ever since, waiting to be called on.)

First, let’s define confirmation bias. I really can’t do better than David McRaney of the excellent website, You Are Not So Smart:

The Misconception: Your opinions are the result of years of rational, objective analysis.

If that’s not bookish enough for you, here’s a scholarly explanation from Dr. Raymond S. Nickerson of Tufts University:

To put it as simply as possible:

Confirmation bias means you see what you want to see — and you don’t see much else.

All this begs the question: Assuming many readers of Motionographer are suffering from confirmation bias (without knowing it), why? Why would they seek out “evidence” of their prior beliefs.

I’m not entirely sure. I have a theory, though, that I’ve developed over the last 10 years of running Motionographer. It’s kinda ugly, but here it is:

I believe that the primary reason might be referred to as “sour grapes.”

Look, Motionographer has a reputation for being difficult to get onto. We call it having a point of view. After all, posting every project we come across would make us just another noisy firehose of content, and we really don’t want that.

So by its nature, Motionographer is exclusionary. There, I said it. Not everyone can be on here.

But that’s also true of any random Tumblr blog or Facebook page. It’s just the nature of publishing on any platform. We just happen to have a sizable audience. And that audience has stuck with us because of the specific way that we’re picky.

This exclusionary status breeds a kind of suspicious resentment in some people. And they probably feel wronged somehow. Or left out. Or angry.

If only there was a way to prove that Motionographer is just an echo chamber for a tiny group of people and/or trends, then everyone would see what a sham it all it is!

And that, folks, is how confirmation bias is born. On Motionographer. According to me.

Of course, we’re not immune to confirmation bias either. It’s unavoidable, hard-wired into the human psyche. We can’t escape it.

On the whole, however, I truly believe we are a resource that is genuinely trying to present an inclusive point of view, one that dashes in enough fringe or avant garde work to keep things interesting but not so much that we disenfranchise our readers or completely lose our focus.

I also believe we could be so much better. I quit my dream job (no really, it was amazing) at Psyop after three years so I could pursue Motionographer full-time. It’s been about a year since then, and I can tell you, we’re just getting started.

The next phase will be more “by the people, for the people.”

How great it’s going to be will be largely up to you. We’ll have more on that soon. :)